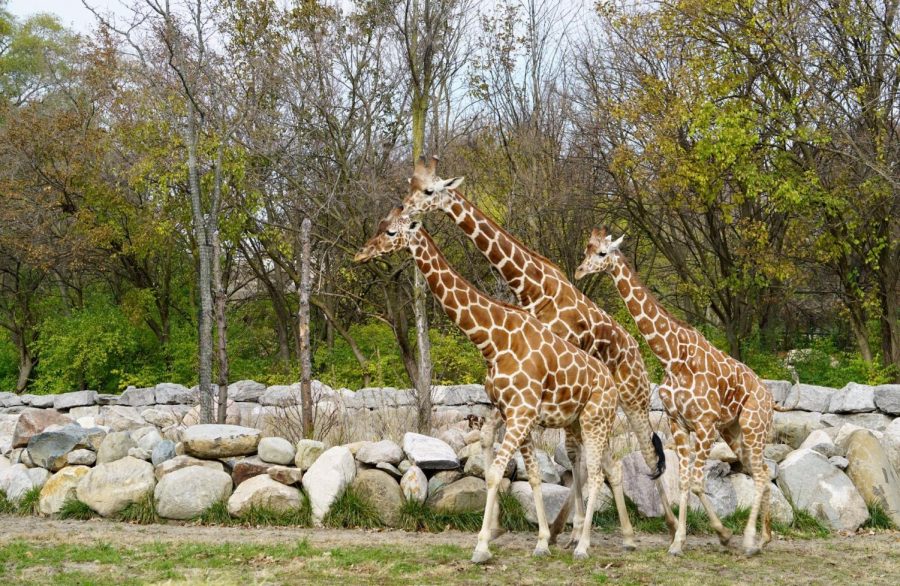 Zara and the other giraffes are getting along very well!

As of Monday, Nov. 9, The Detroit Zoo has introduced a new giraffe, Zara, into its African Grasslands sanctuary. She is two-years-old and came to the zoo from Peoria, Illinois. Zara was brought to the zoo but had to quarantine for a few weeks before being introduced into the sanctuary with the other giraffes, in order to keep the animals safe from the spread of Covid. This is now customary for new animals coming into the zoo. Chief Life Sciences Officer at the Detroit Zoological Society, Scott Carter, says that Zara, “seems eager to learn new things” and is very excited to have the new addition to the herd. Before Zara’s arrival, there were three giraffes: Mpenzi, Kivuli, and Jabari.

The last time The Detroit Zoo got a new giraffe was in August of 2016. That giraffe, Jabari, was born in the zoo. Zara was brought here from Illinois on a breeding recommendation by the Association of Zoos & Aquariums’ (AZA) Species Survival Program (SSP). This program helps zoos all across the country try to sustain healthy, biodiverse, and functioning zoos and exhibits. This is to ensure the safety and happiness of the animals that are in captivity.

As of 2016, giraffes are considered a vulnerable species in relation to extinction. Worldwide populations of giraffes have decreased by 40% in the past 30 years. Their herd sizes have also decreased from groups of 20-30 to six or fewer. This is due to loss of habitat, as well as poaching. Humans have a large part in the endangerment of giraffes. Many poachers hunt giraffes for their skins and many other valuable items that giraffes can offer. Humans are also to blame for the loss of habitats with the growth of cities and taking resources the giraffes and other animals use for their own. This is one of the reasons Zara was brought to The Detroit Zoo. Bringing more giraffes together in an environment where they can live and thrive will help increase their population. Having giraffes and other endangered animals alive in zoos is better for the world ecosystem than having many species going extinct.

Supporting and visiting The Detroit Zoo helps protect animals such as giraffes and other endangered species from extinction. Although they may not be living in the wild, having zoos allows for animals that are declining in population to stay in existence. Go visit Zara the giraffe and all of the other animals at the Detroit Zoo!