The Underlying Racism and Sexism Within Teen Show Ginny and Georgia 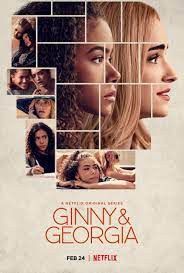 On Feb. 24, 2021, season one of the new Netflix series, Ginny and Georgia was released. This enticing show could best be described as a darker version of Gilmore Girls. It starts with a 30-year-old free-spirited mother, Georgia, and her witty 15-year-old daughter, Ginny (short for Virginia.) They are traveling from Texas to their new home in the picturesque town of Wellsbury, Massachusetts. Before the end of the first episode, viewers are led to believe that the plot will be happy-go-lucky and innocent. This is until it is revealed that Georgia poisoned her third husband back in Texas to inherit his immense fortune and then fled the crime scene with her children after the funeral. Ginny eventually starts to thrive in their new home and begins to create many relationships that she had never had in her (many) previous homes. While this show is compelling to watch, the series ran into a couple of controversial topics.

Ginny, whose mother is white and father is black, deals with her racial identity crisis throughout the series. As a biracial teen in a predominantly white community, she deals with microaggressions daily. For instance, an acquaintance, Samantha, says to her “What are you?” and calls her “exotic looking.” However, Ginny does not respond. In another episode, while talking about Ginny’s race, one of her friends exclaims, “I’m going to marry a Black man, so I can have adorable little mixed babies.” Ginny, once again, decides not to speak up for herself. When all of her friends wanted to wear matching hairstyles, she started to get judged based on what her hair looked like. Because of this, for the next couple of episodes, she straightened her hair so that she could “fit in.” Her boyfriend, Hunter, is also biracial; his mother is white, and his father is Taiwanese. While Ginny and her boyfriend are talking about the discrimination at school, tensions gradually start to rise and a fight breaks out after Hunter yells, “Oppression Olympics! Let’s go!” Hunter and Ginny begin screaming derogatory stereotypes at each other without resolving anything in the end. Ginny’s lack of response in all of these examples could be seen as the show normalizing racism. When Ginny ignores these racist comments, it pushes her farther and farther away from embracing her racial identity as a Black woman. By the show only making her Black identity be about racism and discrimination, it implies that being a Black woman is all about microaggressions and bigotry. It is suggesting that her Black identity’s entirety is made up of hatred from others.

This show has also dealt with backlash in regards to sexism. In a scene where Ginny and Georgia are in an argument, Ginny shouts, “What do you care? You go through men faster than Taylor Swift.” Five days after the release date, Swift swiftly replied to this commentary on Twitter saying, “Hey Ginny & Georgia, 2010 called and it wants its lazy, deeply sexist joke back. How about we stop degrading hard-working women by defining this horse **** as funny… Happy Women’s History Month I guess.” Well said, Taylor. The show is now being harassed on social media saying that they are slut-shaming and misogynistic, to say the least. This anti-feminist line communicates that women who have had a significant amount of love interests should be less respected. Feminism means equality and what this show is implying is undeniably not equality.

After an underprivileged childhood, Georgia becomes portrayed as a gold digger who scams men for their money. However, how does this illustrate women? Are the writers of Ginny and Georgia saying that the only way for impoverished women to prosper and thrive is to marry a wealthy man and just pray he perishes (or in Georgia’s case- just so happens to “die unexpectedly”)? Besides murder, Georgia was involved in many other illegal activities, like illegal poker games, embezzlement, and fraud. Is this also communicating to watchers that the only way for young, penniless women to make money is to participate in illegal endeavors? The answer to these questions based on the script is: yes. The only reason Georgia succeeded financially was from cons and schemes. According to the plot, she would not have been able to support her daughter in any other way. This narrative tells watchers that in society, the only way for a woman to succeed is some way through a man.

The writers of Ginny and Georgia included many societal issues in their script that are certainly controversial in today’s world. Ginny’s race is only considered negative when every comment and discussion about her race is critical. The anti-feminism in the show conveys that to be respected as a woman, she must not have a “busy” love life. If you do decide to watch this show, keep this article in mind so you do not succumb to the racism and sexism presented. While the show has its undeniable issues- ones that will hopefully not be repeated in season two- it is incredibly alluring which makes it effortless to crawl into your bed and binge in under 48 hours.