Directed Studies: Direct Your Own Education 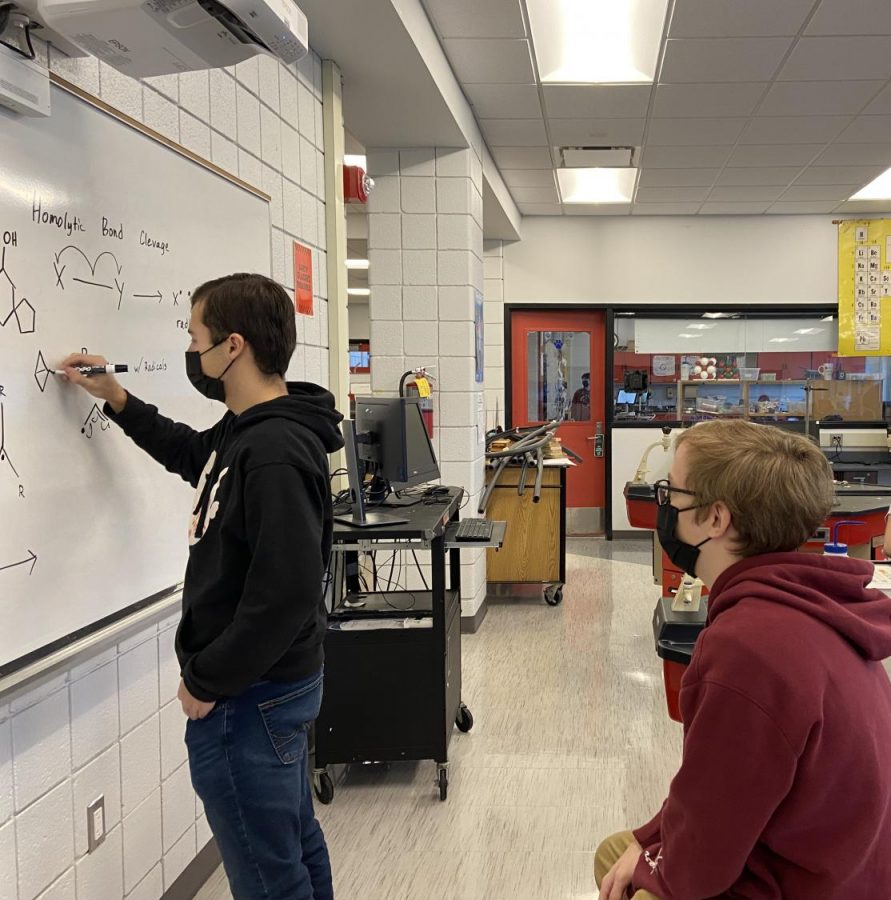 Out of all the categories of classes offered at Berkley High School, directed studies are unlike any other. There are many opportunities to take advanced classes, but none are like the experience of a directed study. Directed studies are a mostly senior type of class that can be taken either one-on-one or in a small group with a teacher of your choice. Taking a class like this can allow you to look more in-depth into a subject that interests you.
There are practically endless topics and structures when it comes to taking a directed study. You could take a math directed study with Mr. Fadoir, or a psychology directed study with Ms. Hart. The subject that you study can be as broad or as specific as you want it to be. It is simply something that you are passionate about.
The structure of this type of course is also up to you and your teacher. The small group environment allows you to learn in whatever way is best for you. For example, seniors Mark Redman, Elliot Perkins, and Mark Kotila have an organic chemistry and physics directed study with Mr. Meacham. Because Mr. Meacham teaches a regular class during their directed study period, for the past few months, Redman has been teaching Kotila and Perkins content from organic chemistry one alongside a textbook. They will continue to use a textbook to guide them through organic chemistry II and theoretical physics into the future.
This way of learning is very open ended. It allows these three students to have a lot of say in what and how they are learning. Redman said that his favorite part of his directed study was this “control,” he said, “It’s very much your own project. You are in control. You get to decide what you do.”
Kotila agreed that he enjoys the control they have over the class. He said that “it’s our class, so we can learn what we want.” He also discussed the independence in the structure of the course. He said that “[Mr. Meacham] helps us out when we need it, but he wants us to be set on our own,” he said. “He gives us parameters.”
In all directed studies, there will be independence and choice in what you do, but not all of them will look just like that.
Senior Victoria Aurbauch’s psychology directed study with Ms. Hart is a great example of this. She also took this course because of her interest in the subject. “I wanted to learn more about the brain and dive deeper into that because we only had one unit on that when I took AP Psych,” said Aurbauch. Although her reasoning for taking this class may be similar to Redman, Kotila, and Perkins’ directed study, her everyday curriculum is very different.
“I go to the library to work on making resources that correspond with each module of the curriculum,” said Aurbauch. “Every two weeks I see Ms. Hart and she gives me feedback on my work.” Not only is she learning the information herself, she is making infographics and helpful materials to those who may take the course in the future. This longer project style is a very popular directed study format.
Not all directed studies have to be academic though. There are many different teachers that have directed studies for topics such as art or theater.

Senior Meredith Batchelor is taking a theater directed study with Mr. Hopkins this year. “We focus on a mix of theater, acting, theater history, or whatever else we want to work on,” she said. Most people take directed studies for subjects that aren’t taught in the normal classroom. “We don’t have a theater class offered at Berkley, and I wanted to learn more.”
Directed studies are the perfect class for someone who wants to learn about a subject they are really interested in that may not be offered as a full class. They allow for a very personal creation of a class that they love. As Perkins says, “It’s a great way for someone to pursue advanced, specific topics. It’s a great way to further your knowledge.”