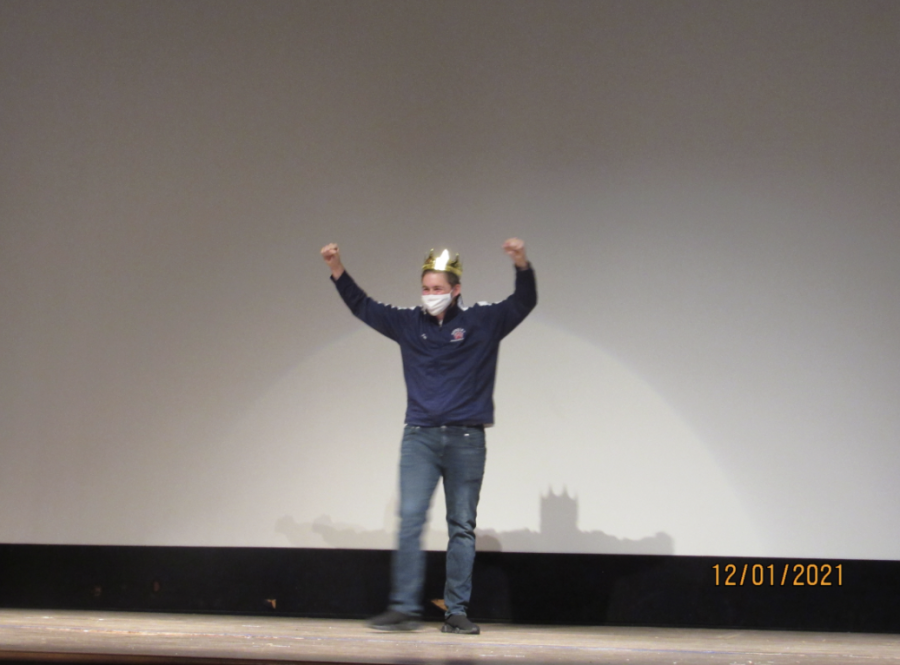 Each year a few of Berkley High School’s Advanced Marketing students put together the Mr. Berkley show–now known as “Berkley Royalty”–as part of their DECA project. Normally the show takes place before winter break, and right on cue, this year’s took place on Dec. 1. In the weeks preceding the memorable event, senior class contestants from all corners of the school rushed to sign up to compete, each one hoping that they could outshine the next with their impressive talents, and successfully dazzle the judges enough to take home the title of Berkley Royalty. Generally, the show makes for a pretty entertaining event, and this year’s production was no exception. But beyond living up to the expectations created by past shows, this year’s show also contained some new additions that caused it to exceed them.
The first important change made to this year’s event started with the signup process. In past years, the competition was only open for Berkley boys to participate in, hence its former title, “Mr. Berkley.” However, Linnah Stevens and Grace Debrecht, who organized the event this year, made the decision to open the event to everyone and make it gender-inclusive. Stevens explained the rationale behind this adjustment. 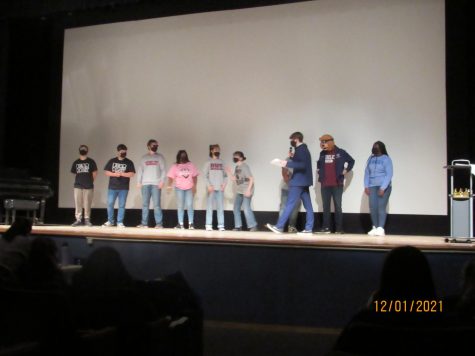 “Grace and I were thinking about how previous years’ shows excluded any gender non-conforming and female students, and we wanted to create an environment where students of all identities could feel comfortable and have fun participating in it!”
Fortunately, in light of this change, there were many girls that decided to partake in this year’s event which undoubtedly made the show all the more enjoyable to watch. Personally, I was ecstatic as soon as I noticed this change upon reading the flyers for the event which were mounted around the school. Although I was not planning on participating myself, I felt this alteration was a step in the right direction. Although it may have been a small change, it is an exemplary way of how we can make Berkley a more inclusive and accepting environment for all of its students. Thankfully though, the changes to this year’s event did not stop there.
Similar to every other year, the show commenced with all of the contestants standing on stage, answering some light-hearted ‘get to know you’ questions asked by the evening’s host, senior Jack Hubbard. This year’s participants: Kaila Welcher, Angeline Ameloot, Zaria Smith, Fanta Cisse, Reggie Holmes, Zach Beylerin, Lev Mechnikov, Joe Friedel, and Sethe Pollard did a great job at getting the ball rolling with their witful and creative responses.
The questions gave the contestants a chance to introduce themselves to us in the audience, and maybe more importantly, the show’s judges: Ms. Hart, Ms. Flood, and Mrs. Blackwell, but it wasn’t until afterward that the real show started. After all had answered their questions, a few stayed on stage for the night’s first dance routine. Ameloot, Smith, Pollard and Beylerin enthusiastically performed a 2010’s favorite, the whip and nae nae dance as the crowd murmured in nostalgic wonderment.
The next portion of the show was dedicated to the night’s core event, the talent portion! This was easily the biggest determining factor in who the night’s grand winner was. This being said, I would just like to preface by saying that each talent blew me away as much as the last, and I was so impressed with all the impeccable talents that each of the contestants had to offer! The first talent, and technically, the first female performance in the history of the show, was Welcher, who performed an intricate dance routine to 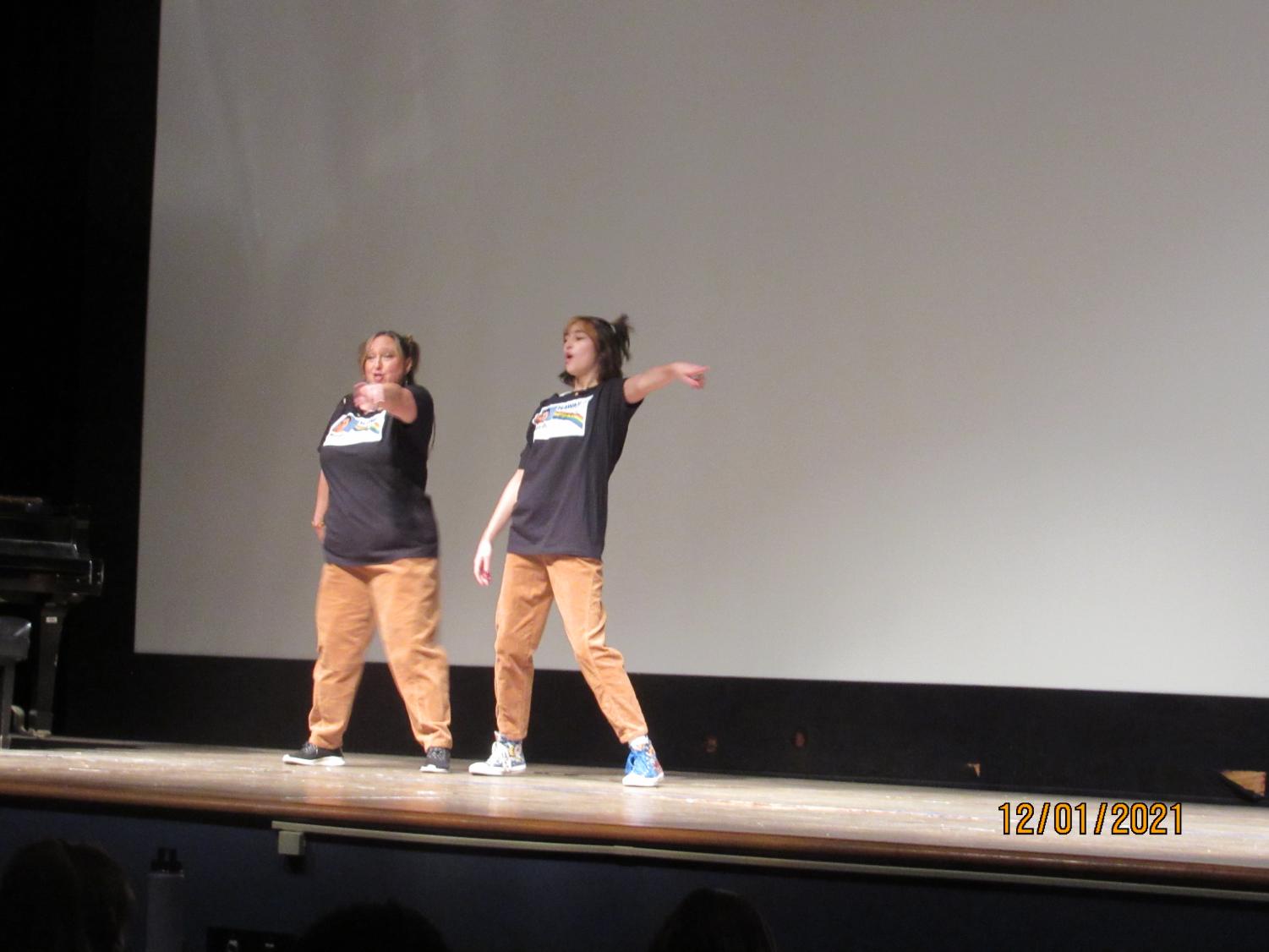 “Never Gonna Give You Up” by Ricky Nelson with none other than her mom! The two were wearing matching outfits, and seriously, did not miss a single beat. After that came Holmes who played his very own rendition of “Mary Had a Little Lamb” on the piano (and yes, I know, I was shocked too that there could be any other version than the original). Next up was Ameloot, who sang “you outa know” by Alanis Morissette beautifully, and acapella nonetheless! Admittedly, that choice was involuntary as the sound system had apparently set out to sabotage her ballad, but she navigated the mishap so effortlessly that to say that she made the best of it would be an understatement. After Ameloot, Smith and company–i.e. her and two of her friends–performed a very well-choreographed dance routine which just made you want to pop and lock with them from your seat. Following her act was Pollard who flawlessly executed one of the more obscure talents of the night, yo-yoing. He performed an array of impressive tricks as music played in the background, and I’ll be honest folks, I never knew yo-yoing could look so cool! Next up came Fredel who had one of the most bizarre talents I’ve ever seen in my entire 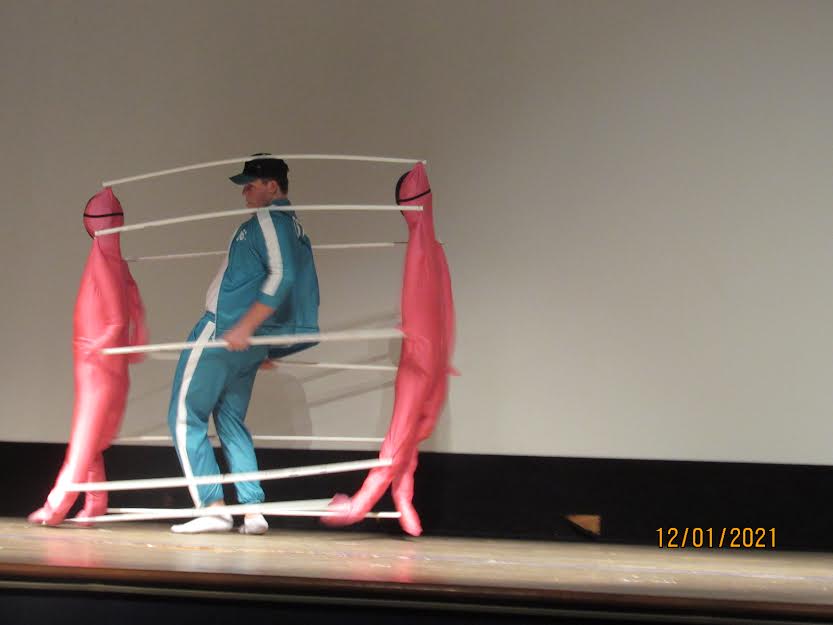 life! Fredel described the talent as an “one-man puppet show.” Despite the vagueness of that description, I will leave you with that because any further details probably couldn’t do the act justice. Hopefully, you check out the picture included here to get a better understanding of why my jaw, and those of the people around me, was dropped during the entire time Fredel was on stage! Then there was Mechnikov and Beylerin with a dirty-dancing-passion-leveled dance routine. And while I’ve been sparing you guys of the particular details of each act, I don’t think I would be doing my reporting duties if I didn’t divulge that there were single dollar bills thrown, and American flag underwear revealed. Then last, but certainly not least, was Cisse who performed the second acapella song of the evening, “Make You Feel My Love” by Adele, and stunned the crowd with her brilliantly powerful voice. I am genuinely not exaggerating when I say that I almost was moved to tears by the solo. Apparently, I was not the only one who especially loved the singing performances as Hubbard claimed that he was inspired by each of the singers’ adaptability.

He said, “There were a lot of technical problems, but everyone was able to improvise, come together, and do what they were meant to do–even if everything didn’t work out perfectly (i.e. the sound system).”
Then, after the talent segment finally commenced, there was a second short dance routine wherein Pollard, Holmes, Cisse, and Welcher performed another childhood classic, Gangnam Style.
After this came another of this year’s new additions, the Tik Tok challenge! For this, competitors were asked to contribute a Tik Tok video of themselves doing pretty much whatever they wanted. They then showed all of the videos on a projector hanging from the back of the stage. All of the videos were great, and many of them were super funny. I definitely got a good kick out of that segment and appreciated the inclusion of a new and relevant trend like Tik Tok.
Then finally, the last portion of the show was the dress ware competition where students flaunted their most impressive styles! Some went the more traditional route with a classic blazer or dress, and some went a different route and added some creative flair to their looks. Maybe they knew that this would be the last way they had to make an impression on the judges before the deliberation, or maybe not, but either way, they all definitely brought their A-game.
The contestants definitely made it very hard on the judges to make a decision, but in the end, Joe Fredel took the win, and honorably accepted Berkley’s very first awarding of the title, Berkley Royalty.

All in all, the event was a blast, and aside from the notable changes that were made to it, the most important thing that set it apart from other years was its suggestion of normalcy. Watching the event brought me back to my freshman year when my brother’s friends, who are now juniors in college, were the ones competing. That nostalgia reminded me of the value of tradition, namely school traditions. Amid the pandemic, some school traditions haven’t been able to take place for the past few years which, admittedly, has had a notable effect on the sense of community within the school, the same sense that those fond memories evoked for me. So personally, watching the show was heartwarming to me, and even more so was seeing underclassmen in the audience. So while I was remembering how these sorts of gatherings were such vital parts of my high school experience, I was also comforted in knowing that they now too get to experience them.
The event was a nice source of amusement, but more than that, it was a glimpse of hope for the future, and an unexpected reminder of what it means to be a Berkley student.