Amy Coney Barrett: What We Know, and What We’ve Learned 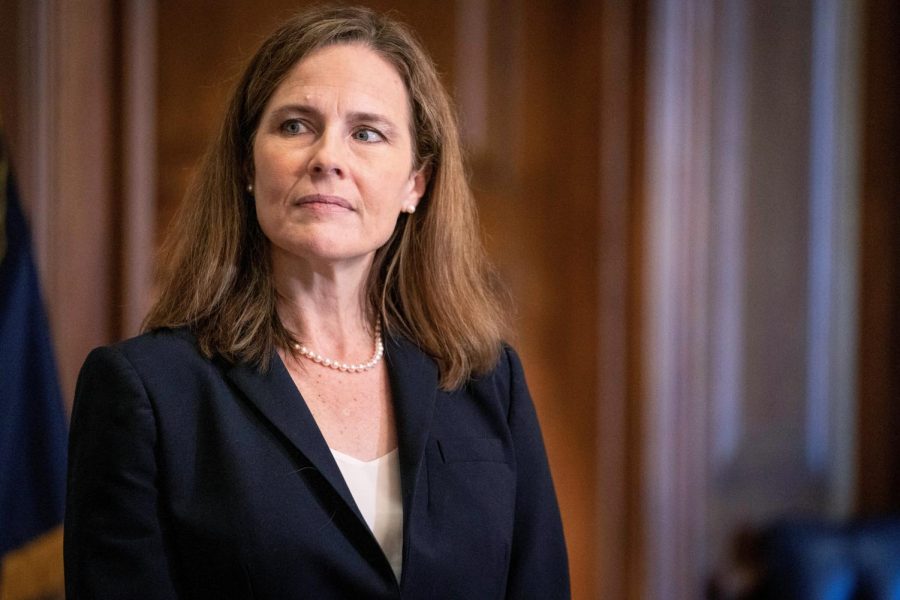 “I want you to use my words against me. If there’s a Republican president in 2016 and a vacancy occurs in the last year of the first term, you can say Lindsey Graham said, ‘Let’s let the next president, whoever it might be, make that nomination.’”

These words have not aged well, to say the least. Lindsey Graham (R-S.C.), Chairman of the Senate Judiciary Committee, along with Mitch McConnell and the Republican Senate in 2016, blocked President Obama’s Supreme Court Nomination of Merrick Garland 10 months before his term ended. They believed that the newly elected President should be the one to nominate a Justice. Just days after the passing of the late Supreme Court Justice Ruth Bader Ginsburg, the Senate pushed for the confirmation of Justice Amy Coney Barret, three weeks before the election.

As the hearings began on Oct. 12, The Judiciary Committee had the opportunity to question Barrett to learn more about her political narrative and agendas. The Senate voted on Oct. 26 to confirm Justice Barrett and the vote was 52-48 in favor. Through the hearings, the public learned more about Justice Barrett’s views and hypothetical decisions on cases.

What we have learned about Justice Barrett through these hearings:
The hearing was meant to give the public some idea of Barrett’s views on critical issues that America will face in the upcoming future. However, her responses often lacked an informative answer. She repeatedly argued that by following the precedent of other Supreme Court nominations in history, judges can decline to answer controversial questions that might come before the Supreme Court. This precedent known as the “Ginsburg Rule” was established in 1993 by the late Justice Ginsburg, and makes it clear that Justices should not give an answer as to which way they’d decide a court ruling in a hearing before they are presented a case.

Climate Change:
Senator Kamala Harris asked Barrett, “Do you believe that climate change is happening and threatening the air we breathe and the water that we drink?”
Barrett declined to give a detailed response by stating, “I will not express a view on a matter of public policy, especially one that is politically controversial.”

It is understood that judges do not and should not express political views during the hearings, but Climate Change is not something deeply controversial. It is a yes or no question, asking if she believes climate change is a threat. Many believe that the citizens of America deserve at least some actual response to that question as it is a topic that will, without a doubt, have the most apparent need to be addressed in the near future.

2020 Presidential Election:
One of the reasons President Trump believes that confirming a justice right before the election is crucial is because the election results could go to the supreme court. Americans see the relevance of this now with Trump using litigation and lawsuits to challenge the legitimacy of the votes. Trump said, “I think this will end up in the Supreme Court, … and I think it’s very important that we have nine justices.”

When asked if she would recuse herself from a case if the election results come before the Supreme Court, Barrett exclaimed “…I can’t offer a legal conclusion right now about the outcome of the decision I would reach.”

Barrett is not discredited for declining to answer this, and if a case did arise before the Supreme Court, there are many reasons why she should or should not recuse herself from making a decision. However, if a court case does arise that questions the election’s legitimacy, the election could be decided by her vote. This means that the President’s future is in the hands of someone who was just given her job by the current president, which might sway her opinion.

Abortion:
Lindsey Graham believes her nomination is a turning point in history, claiming “This is the first time in American history that we’ve nominated a woman who’s unashamedly pro-life and embraces her faith without apology.”

Although Barrett has pro-life views, this does not mean that the decision of Roe V. Wade can be overturned, even though the Supreme Court is stacked with a majority of conservatives.

When questioned about the decisions regarding Roe V. Wade, Barrett responded, “If I express a view on a precedent one way or another, whether I say I love it or I hate it, it signals to litigants that I might tilt one way or another on a pending case.”

According to an article published by CBS news written by Kate Smith, “… Barrett will almost certainly hear a case that challenges the legal protections surrounding abortion services. Today, 17 cases related to abortion are one step away from the Supreme Court and two — including a 15-week abortion ban from Mississippi, which challenges the core holding of Roe — could be taken up as early as its next term.”

This is one of the biggest concerns for Americans during this period. Now the Supreme Court has 6 conservatives – a majority- with several cases related to abortion on the court’s doorstep.

Affordable Care Act (ACA). Also known as Obamacare:
President Trump has spent the past four years examining every single way to repeal the ACA, confirming Barrett might be the way he finally achieves this. The case California V. Texas is set to be determined by the Supreme Court on Nov. 10. The case argues whether the individual mandate, a law that forces people to obtain a certain amount of healthcare coverage or pay a penalty without healthcare, should be abolished. Currently, the penalty of not having healthcare is set to zero, after the Tax Cuts and Jobs Act of 2017 was enacted.
Barrett believes the determination of the ACA case is based on “severability.” The main question posed is, is the individual mandate severable from the ACA? This means that the court is deciding whether the individual mandate, a critical part of the ACA is unconstitutional and if it is, then if the whole ACA should fall.

The ACA covers over 20 million Americans who were previously uninsured. The ACA also ruled that insurers can’t deny people with preexisting conditions, which affects nearly 133 million Americans under the age of 65, as reported in a New York Times article written by Reed Abelson and Abby Goodnough.

The article also states that “The Kaiser Family Foundation estimated that 54 million people have conditions serious enough that insurers would outright deny them coverage if the A.C.A. were not in effect.”
If the ACA is repealed, millions of Americans might find themselves uninsured or paying ridiculous premiums for coverage since health insurance companies would be allowed to charge more based on preexisting conditions. If the ACA is repealed in court, Trump will have to fill a large gap in the healthcare system if he is reelected.

Barrett’s confirmation has undoubtedly stirred many emotions within the American people. Her views, while controversial, now play a role in many important decisions to come. In today’s political climate, there is little room for error, especially for someone with a position of power as high as Barrett’s. As citizens, we must remain strong in what we believe by using our constitutional rights to speech, assembly, and most of all, make sure to make our voices heard by voting.