Due to COVID-19, many high schools including Berkley were forced to cancel their annual homecoming dance. Many students found this extremely upsetting. Freshmen were upset since it is their first year of high school, and it is difficult to meet new people without school-wide events. For seniors, it’s also disappointing since it was supposed to be the culminating homecoming of their high school years. I thought I would set out to interview these two classes of BHS students and get their view on not being able to go to homecoming.

The cancelation of homecoming caused freshmen to feel like the start to their high school experience is incomplete. Freshmen Maya Sermo and Sophia Bielecki had different perspectives on not having a homecoming.

Bielecki states that she was “upset there was no homecoming because she was looking forward to this new experience.”

On the other hand, Sermo was content with the fact that she would not have her first homecoming. Sermo stated, “I think it’s worse for Seniors than it is for Freshman because it’s their last year of high school.”

Instead of looking at it negatively, Sermo acknowledged that she will have three more homecomings in the future and that missing one is okay. As for seniors, many were upset they did not get one last homecoming and feel as if their senior year is not like the typical last year of high school.

Many seniors such as Liam Sarris are going to miss homecoming because “It is a chance to come together and for everyone to have an opportunity to have fun and dance around care-free.”

Fortunately, their senior year has been good in one aspect; the football team has had a successful season so far.
As a senior on the BHS varsity football team, Aaron Sugarman claims, “It would have been great to have a senior homecoming especially with the great football season that we are having.” 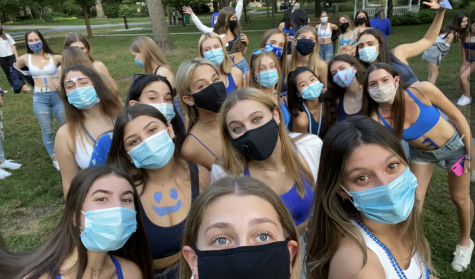 To go along with what Sugarman said, senior Shay Finn states, “Everyone usually has so much fun and gets so excited about the homecoming football games.”

Although the cancelation of typical high school activities is upsetting, especially for seniors and freshmen, all students are making the most out of what they are given.